HAHA. “Sin City” is more like “NOM CITY!” I traveled there for a huge ophthalmology meeting back in November — The American Academy of Ophthalmology — it has a ring to it does it not? Now, I have never been to Vegas, and I never intended to go. I always thought of it as a really cheap place. It reminded me of Atlantic City, but boy, was I wrong! Aside from the crazies that roamed the Vegas strip, it was a beautiful, beautiful place filled with lights and tall buildings.

It was a crazy trip. The flight there and back was terrible and I’m not the best flyer in the world. There was lots of turbulence, so I was aggravated and tired when I got there. Let me tell you about my first hour in Vegas.

I then sunk down to the floor and ate my burger in sadness until a lovely maid came over to check on me. She got my life back and I was happy again. My trip otherwise was great. There was a lot of work and I was semi-stressed (not as bad as last year), but I really had a great time with all of my co-workers. I think this was the first work trip that we all had a lot of fun and that is remarkable considering this was the most anticipated and most stressful meeting of the year. The highlights of the trip were definitely the food and I took pictures of it all! I also was able to see two Cirque du Soleil shows: Zarkana and KA. Both gorgeous shows, but KA definitely won me over.

Below are my favorite dishes from Vegas. I won’t be giving you all in-depth of all my dishes… that would take a lifetime! But I will give you my favorites… and there are quite a few.

A definite top favorite of mine, and I actually went there two times! Once for dinner and once for lunch. What did I think? Obviously, delicious. I didn’t expect to find a restaurant with fabulous Southern cuisine… AND I LOVE SOUTHERN CUISINE. The meals were executed to perfection. 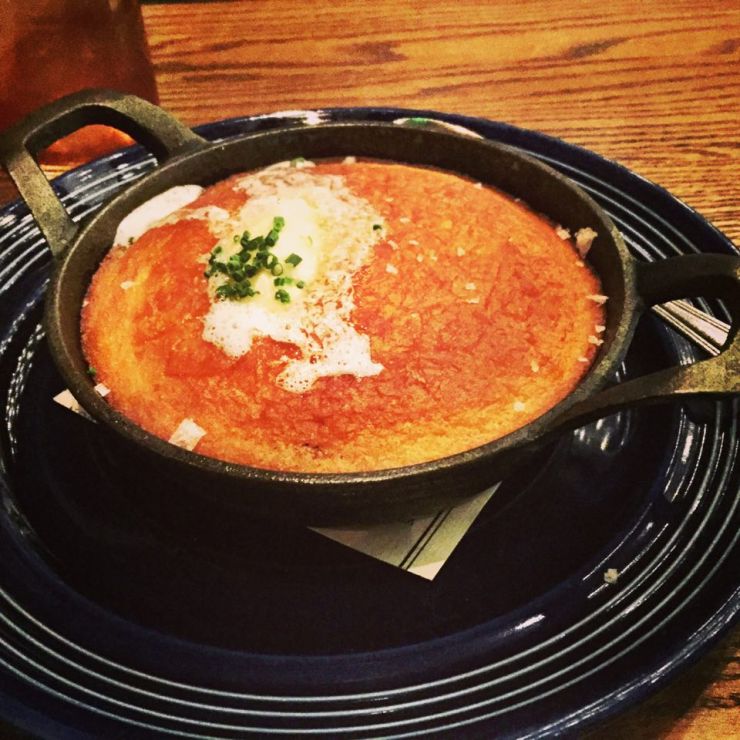 Bacon, Cheddar, Jalapèno Skillet Corn Bread
So much butter and so much flavor. While the bread itself was buttery, it was served with an extra pad of butter on top that melted as we ate. My co-worker and I were in awe. The best cornbread I’ve ever had. The edges were crispy and the inside of the bread was soft and fluffy. While it was a savory dish, there was a hint of sweetness to it that balanced out the saltiness of the dish. Complete and utter bliss.

Nutella Creme Brûlée
Ah. Nutella. I don’t think anything could go wrong with it. I mean, come on. The chocolate, the hazelnuts… it’s a beautiful concoction. It’s hard to believe it was an inexpensive alternative back in the day. It is a delicacy in modern times! The dessert was really great. The classic crispy brûlée-ed top and the ooey, gooey Nutella center and it was paired with a refreshing creme fraiche. SO decadent.

Lobster Enchiladas
A beautifully decorated restaurant with a 360 degree style bar. We were lucky enough to snag seats at the bar because we didn’t have reservations and it was a full house. Everything was good here. The margaritas are a must. It’s what their known for and I don’t usually order margaritas because they are too strong for my taste most of the time, but the one I had (mango) had the perfect balance of sweetness and tartness from the alcohol. I ordered the lobster enchiladas and they were so fresh! Usually enchiladas are huge and are smothered in mole and cheese. Perfectly seasoned and perfectly fresh. I absolutely loved it.

Scottish Egg
My lifelong dream — I may be exaggerating — is to try a Scottish egg. I’ve seen it on blogs, on Instagram, on YouTube. A soft-boiled egg wrapped in pork sausage, breaded and then fried. I mean HOW CAN YOU GO WRONG? My first experience was one to remember. Let’s just leave it at, it was a really good deep-fried egg. And the center was still runny… So much magical experience.

Black Sesame Flan with Passion Fruit Macarons
My final meal in Vegas. Right before the best show I’ve ever seen: KA. It was one to remember too. Not to get TOO into it, but the entrees were equally as delicious as this dessert, but I have a sweet tooth so I’m leaning towards this dessert as my favorite. No words can describe my experience with this dessert. Yes, experience. It gave me bliss, it gave me pleasure and it gave me longing. Like right now, I’m longing for that dessert. Now, just as a disclaimer, my cousin makes the best flan around and I’ve never found one equal to it… until I went to Shibuya. The custard was so creamy and paired with the nuttiness of the black sesame seeds. It was like an explosion of happiness in my mouth. And each bite became progressively better than the last. Can that happen, is that possible!? And paired with the light and fluffy whipped cream. Sigh… so much happiness in one plate. I can’t wait to go back there again.