Over the weekend I was trying to be creative and well.. that Korean BBQ that we were supposed to get didn’t happen and we’re postponing it to this week. And the cravings kicked it, so I had to make due with what I had. So it was Korean night on Sunday and well, it couldn’t have been any better.

I adapted this recipe from The Nourished Caveman. Check her out! 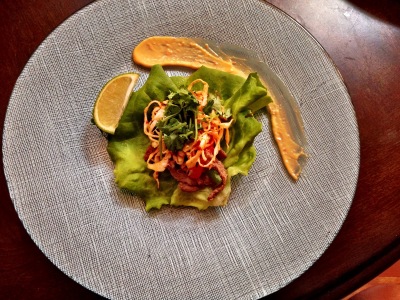 How you’ll do it:

1) Put all of the marinade ingredients in a food processor or blender and blast it until you have an even consistency.
2) In a large bowl, pour in the marinade over the sliced steak. With your hands, mix until all the meat is covered in the marinade. Cover with plastic wrap for at least 1 hour, better for 2-4 hours.
3) Once the meat has been marinating for hours, heat a skillet on medium-high. Once skillet is heated, melt the coconut oil and put the meat into the pan. Brown the meat until it all has been cooked thoroughly. Once the meat has reached this point, toss in the peppers and cook for about 5 minutes. Plate and garnish with scallions.
4) Serve this with bibb lettuce, spiced slaw, cilantro, lime and spicy mayo.

1) Place all the ingredients for the slaw except the cabbage in the food processor and pulse until it looks like a chili paste. It should taste sweet with a little spice kick.
2) In a large bowl, combine the chili mixture and cabbage until the cabbage is fully incorporated into the paste.